The Blessed Mother and the Rosary

Apparitions and Miracles
Mary Mother of the Church
The Rosary

The first chapter of the Gospel of St. Luke describes the narrative of the infancy of Jesus.
26
In the sixth month, the angel Gabriel was sent from God to a town of Galilee called Nazareth,
27
to a virgin betrothed to a man named Joseph, of the house of David, and the virgin’s name was Mary.
28
And coming to her, he said, “Hail, favored one! The Lord is with you.”
29
But she was greatly troubled at what was said and pondered what sort of greeting this might be.
30
Then the angel said to her, “Do not be afraid, Mary, for you have found favor with God.
31
Behold, you will conceive in your womb and bear a son, and you shall name him Jesus.
32
He will be great and will be called Son of the Most High,* and the Lord God will give him the throne of David his father,
33
and he will rule over the house of Jacob forever, and of his kingdom, there will be no end.”
34
But Mary said to the angel, “How can this be since I have no relations with a man?”
35
And the angel said to her in reply, “The Holy Spirit will come upon you, and the power of the Most High will overshadow you. Therefore the child to be born will be called holy, the Son of God.
36
And behold, Elizabeth, your relative, has also conceived* a son in her old age, and this is the sixth month for her who was called barren;
37
for nothing will be impossible for God.” 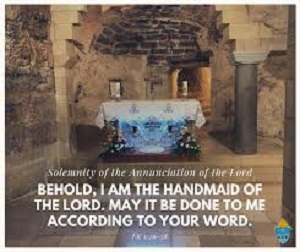 The angel also told Mary that her elderly cousin, Elizabeth, was 6 months pregnant as well, and Mary rushed to visit her cousin.
39
During those days Mary set out and traveled to the hill country in haste to a town of Judah,
40
where she entered the house of Zechariah and greeted Elizabeth.
41
When Elizabeth heard Mary’s greeting, the infant leaped in her womb, and Elizabeth, filled with the Holy Spirit,
42
cried out in a loud voice and said, “Most blessed are you among women, and blessed is the fruit of your womb.
43
And how does this happen to me, that the mother of my Lord* should come to me?
44
For at the moment the sound of your greeting reached my ears, the infant in my womb leaped for joy.
45
Blessed are you who believed* that what was spoken to you by the Lord would be fulfilled.”
46
And Mary said:* 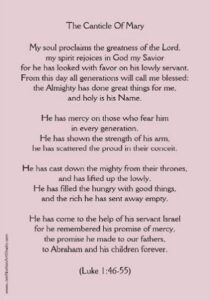 Our Blessed Mother intercedes for us with her son Jesus as he will never refuse his mother’s request. The Gospel of John tells us:
1
* On the third day there was a wedding* in Cana* in Galilee, and the mother of Jesus was there.
2
Jesus and his disciples were also invited to the wedding.
3
When the wine ran short, the mother of Jesus said to him, “They have no wine.”
4
* [And] Jesus said to her, “Woman, how does your concern affect me? My hour has not yet come.”

5
His mother said to the servers, “Do whatever he tells you.”